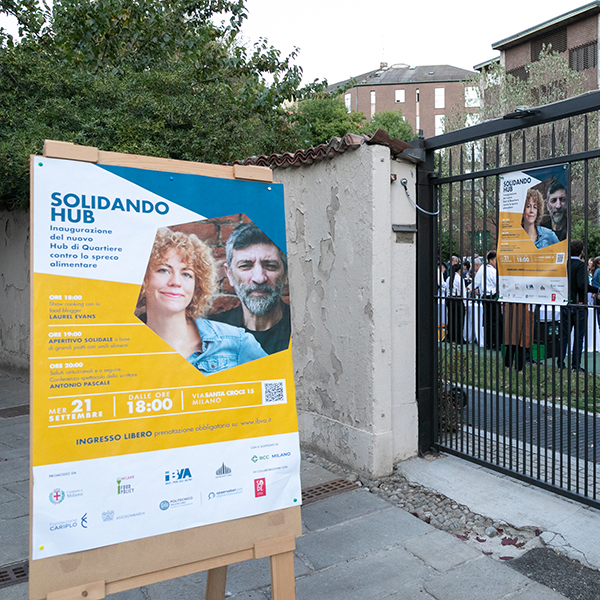 A new collection and storage centre for surplus food from various large-scale distribution chains to expand the network of district hubs that are taking action against food waste, set up by the City of Milan in collaboration with local partners and associations.

The new Centre Hub, which officially opened today, is located on the premises of Associazione IBVA, on Via Santa Croce 15, next to Solidando, the social market that has been committed to fighting food poverty for years.

Alongside the Gallarate, Isola and Lambrate Hubs, as well as the Foody Hub in the Milan agri-food market, the opening of the Centre Hub signifies a new point of contact in the City of Milan’s network that is fighting against food waste and supporting food aid initiatives in the city – a network which has already been awarded the Earthshot Prize in 2021 and is setting an international standard.

The opening of the Centre Hub was possible thanks to a tried and tested public-private partnership model. In particular, the initiative has been promoted by the City of Milan’s Food Policy department, IBVA, Municipality 1, Fondazione Cariplo, Assolombarda and the Politecnico di Milano through their Food Sustainability Observatory. The Hub was created thanks to the generous contributions of the Banca di Credito Cooperativo di Milano. A fair and green product collection and delivery service will be provided thanks to the partnership with So.De, the socially-conscious, supportive and sustainable delivery service.

A total of four hubs are already active throughout the Milan area: the Hub in Zone 4 at Foody – Milan’s agri-food market – which represents the evolution of the Fruit and Vegetable Hub, developed during the 2020 lockdown and thanks to which 138 tonnes of fresh produce were distributed over eight weeks; the Isola district Hub (Zone 9); the Lambrate Hub (Zone 3); the Gallarate Hub (Zone 8).

In 2021, the two hubs that had been set up in the Isola and Lambrate districts collected a total of over 170 tonnes of food, equating to about 340,000 meals. In the first half of 2022, these two hubs were also joined by the Gallarate and Foody hubs, which in the first six months of that year alone collected 130 tonnes, equating to over 260,000 meals.

In total, more than 3,000 households have been helped thanks to the work of the district hubs and the cooperation of a dozen brands involved across almost thirty outlets. 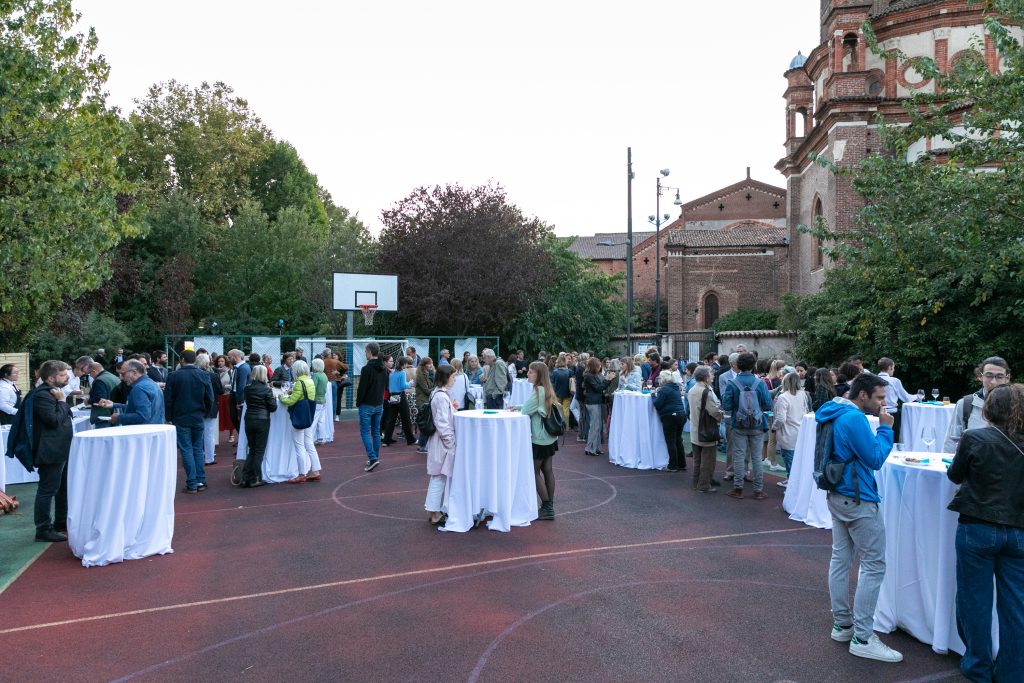 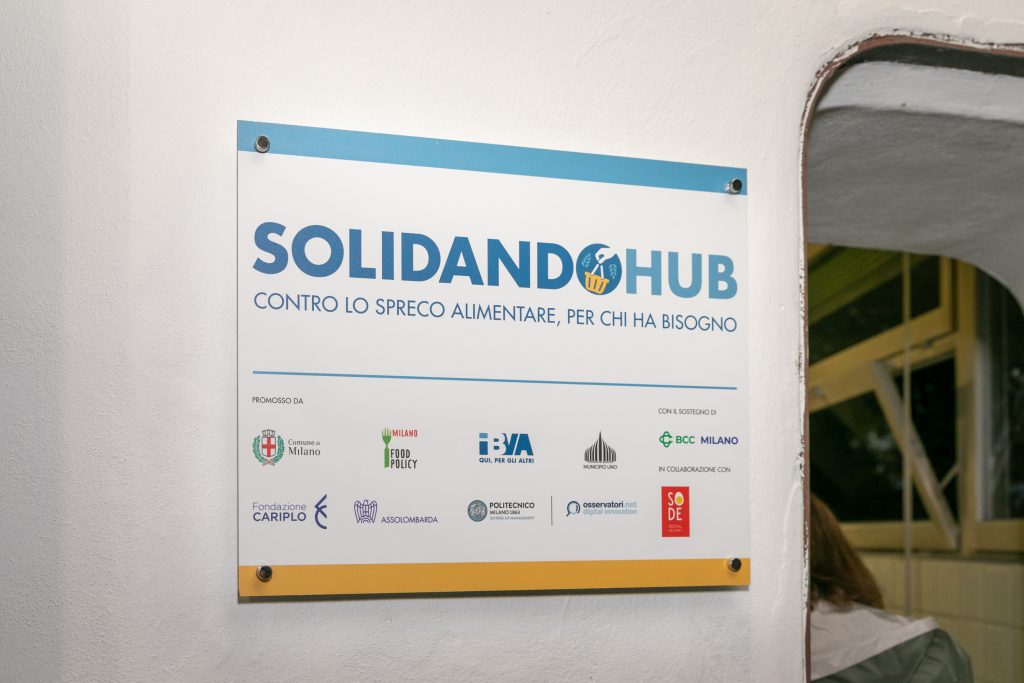 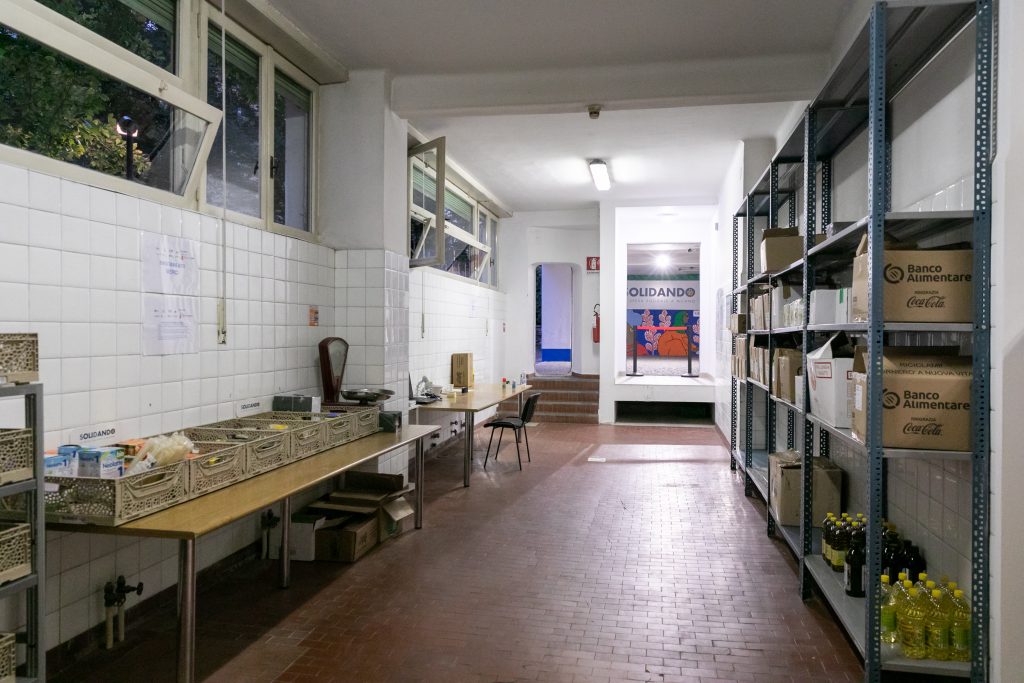 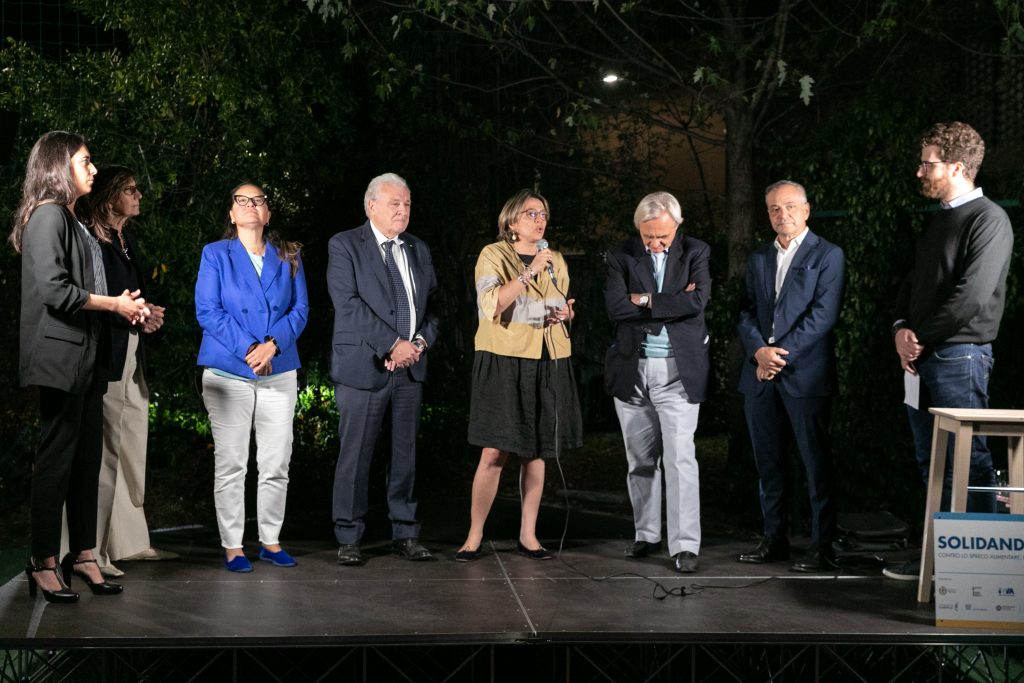 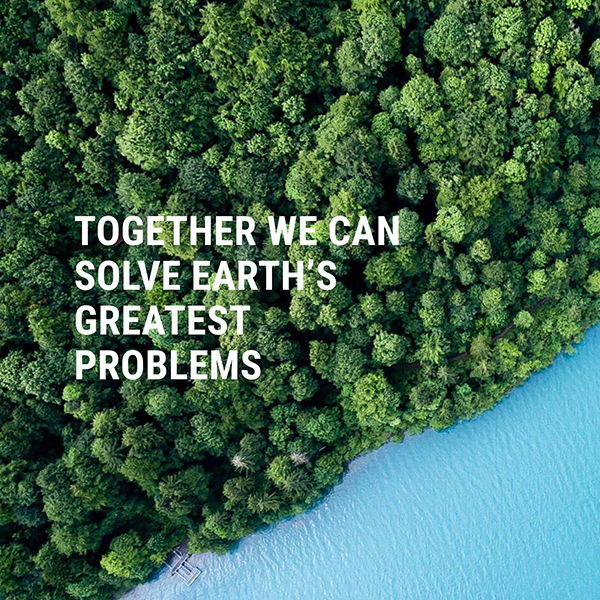 The Milanese project against food waste is one of the 3 finalists of the prize promoting environmental protection measures, in the category “Build a Waste Free World”

On 17 September, Prince William announced that the City of Milan Food Waste Hubs have made it into the shortlist of 15 finalists of the inaugural year of the Earthshot Prize, the prestigious international award for the best environmental protection solutions.

In particular, Milan will be vying for the prize in the category “Build a Waste Free World” alongside another two projects: one for the conversion of waste into safe agricultural inputs (Kenya) and one involving a water treatment system that turns 98% of water waste into clean fresh water (Japan). Food Waste Hubs was selected from among 750 projects submitted worldwide.

Making it into the shortlist of Earthshot Prize finalists confirms the great teamwork demonstrated by the city of Milan. Through the work of the City Council and many local, private and third-sector companies, today Milan has 3 hubs in the districts of Isola (2019), Lambrate (2020) and Gallaratese (2021).

The project stems from a partnership, established in 2016, between the Milan City Council, the Politecnico di Milano, Assolombarda, Fondazione Cariplo and the QuBì Programme.

In particular, the Politecnico di Milano School of Management conducted a network feasibility study and monitored the hubs’ operation and the impact generated by the project, thus making it possible to build an extensible logistic model replicable in other areas of the city.

The winners will be announced in late October. 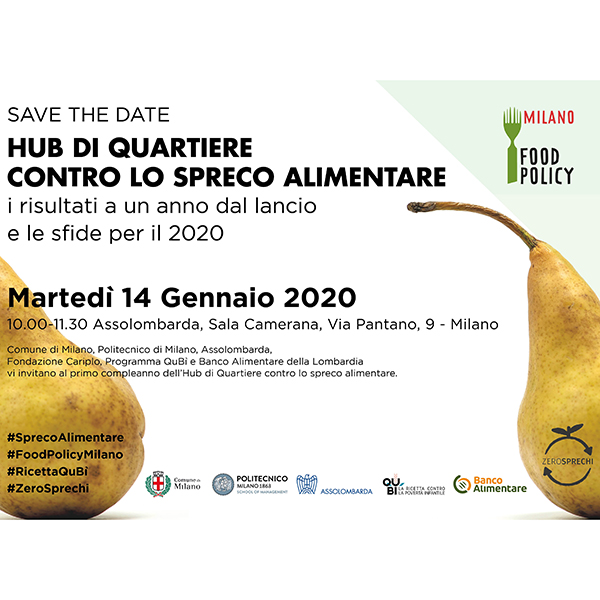 Last 14th January, the local Food Hub located at Via Borsieri 2 in Milan (District 9) celebrated its first birthday and an incredible success: 77 tonnes of food, the equivalent of 154,000 meals, were saved from going to landfill in its first year, with 21 non-profit organisations, 11 supermarkets and 5 company canteens involved in the initiative.
And a new Food Hub in District 3 is ready to open its doors.

The Deputy Mayor in charge of Food Policy, Anna Scavuzzo, said: “This has been a great success for the Via Borsieri Hub – it has laid the foundations for other districts. The figures show that if everyone involved works towards a common goal, it is possible to create an effective and supportive network capable of meeting the needs of a big city like Milan. With the participation of two important new players, AVIS Comunale di Milano and Banca di Credito Cooperativo di Milano, we are now ready to open another Hub in District 3.”

In 2015, Milan introduced a new Food Policy to pioneer a more sustainable food system throughout the city, introducing a multidisciplinary and participative approach under which city authorities act as drivers and enablers. A top priority in this food policy is to reduce food waste, and the best way to achieve that goal was to bring local players on board, namely the city’s research centres, institutions, private sector, foundations and social actors.

To translate this priority into concrete action, in 2016 the City of Milan, Assolombarda (the Lombardy section of the Italian Entrepreneurial Association) and the School of Management of the Politecnico di Milano signed a memorandum of understanding, entitled “Zero Waste”, drawn up to reduce food waste and implement a new method for recovering and redistributing surplus food which would then be donated to people in need.

The design and experimentation of such a model aimed at collecting and redistributing unsold products or unserved cooked meals was built around local networks of supermarkets, corporate canteens and non-profit food-aid organisations. It gave rise to the first district Food Hub promoted by the City of Milan, Assolombarda, the School of Management of the Politecnico di Milano, in partnership with Banco Alimentare Lombardia (Lombardy Food Bank) and supported by the “QuBì Programme – The recipe against child poverty”, promoted by Fondazione Cariplo with the support of Fondazione Vismara, Intesa Sanpaolo Bank, Fondazione Romeo ed Enrica Invernizzi, Fondazione Fiera Milano and Fondazione Snam.

The School of Management of the Politecnico di Milano conducted a feasibility study of the model and has been in charge of monitoring operations at the hub and for the whole system whilst measuring the impact of the project over a 12-month period, building a logistical model that now is being scaled up and replicated in other areas of the city.

All district Hubs will provide practical answers to the demand for city-wide food waste reduction and access to food by those in need, ensuring a small-scale food collection and redistribution service.
The Via Borsieri Hub donated 77 tonnes of food – equivalent to about 154,000 meals – with an economic value of €308,000, reaching the levels predicted by the Politecnico di Milano in its model. Over the course of the year, the number of social players benefitting from the service, i.e. non-profit organisations, increased from 14 to 21.

“I am very pleased to have contributed to a systemic solution which addresses the salvage of small and scattered surpluses of food, which are the most difficult to manage,” said Alessandro Perego, Director of the Department of Management Engineering at the Politecnico di Milano. “These projects are an important lesson in mutual support for individuals and the community as a whole. Something that we seriously need at this time, when the risks of increasing social inequality and marginalisation are high.”

Banco Alimentare Director Marco Magnelli said: “One year later, the results of a projects that functions from the perspectives of logistics, hygiene, and health and safety, promoted and coordinated by Banco Alimentare della Lombardia, confirmed that it is a successful response to the region’s food needs. This was made possible due to the partnership between public, for-profit, non-profit and university institutions.”

The companies associated with Assolombarda which are involved in the project have participated through their canteens by donating surplus food, thus helping to reduce waste. In addition, large-scale retailers provide different types of food on a daily basis which passes through the Hub and is redistributed to the various parties; eleven supermarkets and five company canteens are part of the initiative.

Assolombarda General Manager Alessandro Scarabelli said: “The ‘stronger together’ approach is key to the success of the via Borsieri district Hub and the opening of the new District 3 Hub. A goal that we are proud of, one which was made possible due to the contributions of our companies, which played an active role in reducing food waste and promoting an effective and replicable model. The results of the initiative encourage us to bolster our commitment to this issue, with the aim of spreading good practices and a culture of waste reduction for a greater degree of sustainability and responsibility throughout the region.”

In 2020, the next important innovation to come is the opening of an additional Hub in District 3, in the Lambrate area. This will involve the participation of AVIS Milano (a Blood Donors Association) and Banca di Credito Cooperativo (BCC), the winner of the recent public call for tender announced by the City of Milan to collect the necessary resources to set up new Hubs across the city.

BCC President Giuseppe Maino said: “We are aware of the urgent need to strengthen this network throughout Milan, so that it is capable of fighting food poverty and waste. We decided to support the project, because we share its objectives and values. We are proud of our members who decided to donate an amount equivalent to their usual Christmas bonus from the bank to the Hub construction project. We have long been committed to developing a positive-action network with the Metropolitan City’s most important associations and institutions to support and strengthen these regional efforts.”

Avis Milano General Manager Sergio Casartelli said: “Avis Milano submitted its application for the District Hubs’ call for tender because it is in line with our objectives. We will contribute to this important project for the city by providing our spaces in District 3, and join the network of players involved in the fight against food waste in Milan.”