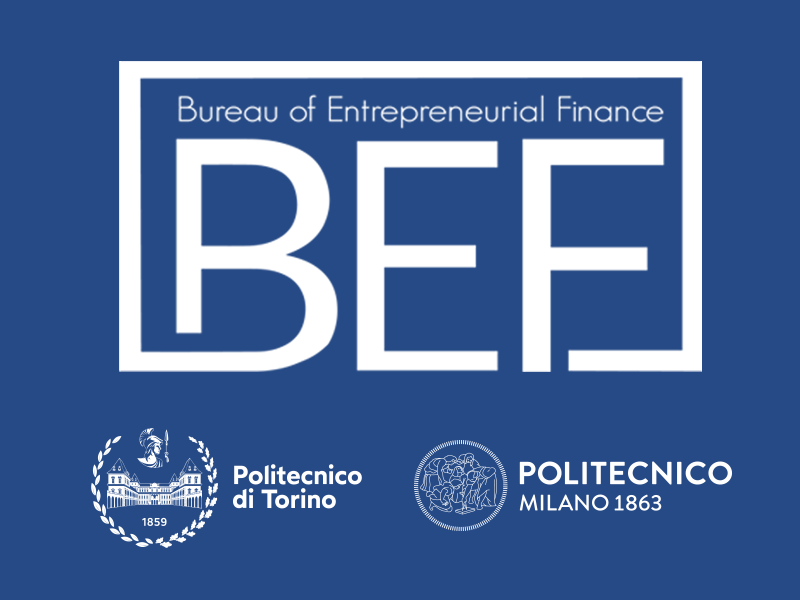 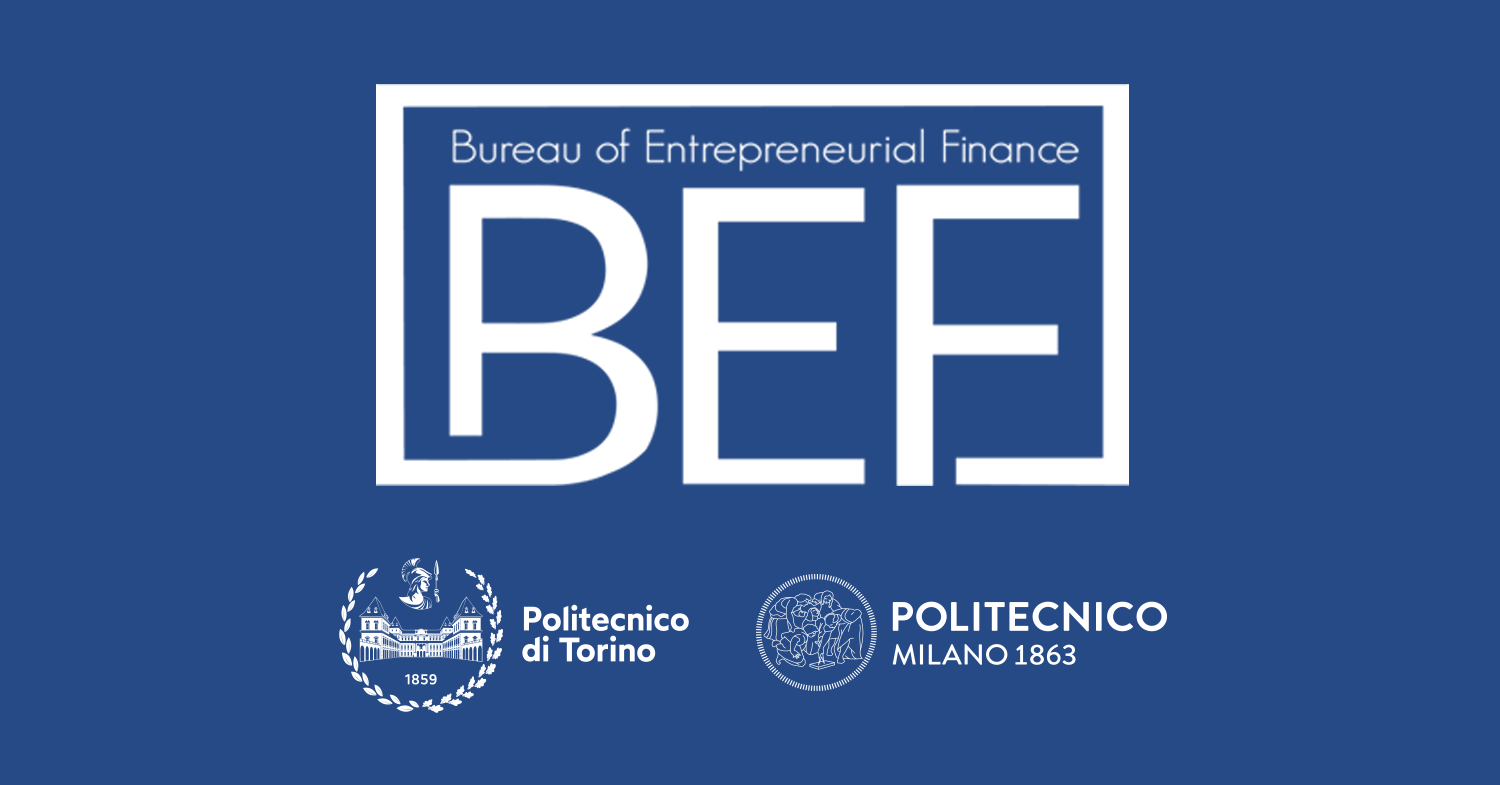 The Bureau of Entrepreneurial Finance (BEF), a permanent centre established at the initiative of the Politecnico di Milano’s School of Management and the Politecnico di Torino, in order to connect the most recognised scholars and players in the field of venture capital in Europe.

More than 500 responses to the survey, received mainly from European and North American operators in the second half of 2021, suggest that the current trend is to invest at later stages in the lifecycle of start-ups in order to reduce the level of risk and to favour sectors like healthcare, energy and pharmaceuticals, driven by the pandemic.

Milan, 9 May 2022 – Venture capital in the time of Covid-19. As the pandemic significantly impacted many aspects of the global economy, forcing businesses to redesign their internal processes in order to stay in the market, it also drove venture capitalists to adapt their own investment practices to the changing scenario. Examples of this include investing at later stages in the lifecycle of start-ups or favouring sectors like healthcare, energy and the environment, pharmaceuticals and financial services, while turning away from digital services and commercial distribution.

These are some of the findings highlighted in the Report on Venture Capital and Covid-19 which was presented this morning at the Politecnico di Milano during the launch of the Bureau of Entrepreneurial Finance (BEF), a permanence centre established at the initiative of the Politecnico di Milano’s School of Management and the Politecnico di Torino – co-founded by professors Massimo Colombo, Annalisa Croce, Elisa Ughetto and Vincenzo Butticè – with the aim of providing networking and discussion opportunities for the most recognised scholars and players in the field of venture capital in Europe.

The survey was conducted in the second half of 2021, at the height of the post-Covid economic recovery but while price increases linked to raw materials and energy were already being seen, and responses were received from more than 500 funds, with excellent coverage of European funds (which increased their investments by 2%) and North American funds (which reduced their investments by 1%).

Globally, half of all funds (52%) stated that they had changed their investment strategy after Covid, even if only moderately. This percentage was much lower for European funds (57% of which did not change anything) and lower still (61.5%) for Italian funds, probably due to the fact that they tend to have higher rates of cross-border investment (90.2% of those making cross-border investments – 83.5% in Italy – did not reduce them in favour of domestic investment).

Another interesting aspect is the reduction in the number of seed stage investments, and more generally investments in the initial stages of the lifecycle of start-ups, favouring later stages of development (ranging from +1.2% for early- and late-stage investments to +4.4% in the mid-stage investments), with the trend being more evident among smaller funds.

“Uncertainty has increase everywhere and investors therefore prefer to shift the focus of their investment towards more mature businesses with more moderate risk profiles”, explains Elisa Ughetto from the Politecnico di Torino’s Department of Management, Economics and Industrial Engineering, one of the curators of the study and co-director of the BEF together with Annalisa Croce from the Politecnico di Milano’s Department of Management, Economics and Industrial Engineering. “Moreover, also in response to the sudden changes occurring in recent years, investors are relying less on their instincts (gut feeling) than in the past, and are basing their decisions more on objective aspects such as favourable economic environments, business models and any public incentives”. “Investment strategies have also changed”, adds Annalisa Croce. “Business sectors that performed well during the pandemic, such as healthcare and pharmaceuticals, are now being favoured, while sectors which traditionally receive high levels of investment from venture capital funds, such as ICT, are in decline”.

The sectors which have seen increased investment are healthcare (+2.4%), energy and the environment, pharmaceuticals and financial services (all +1%), training and semiconductors (+0.6%), while digital services (-1.4%), including those linked to the internet and mobile devices (-1%), and commercial distribution (-1.6%) are in decline.

Funds have also lowered their expectations for expected returns (IRR) and have become stricter in their assessment of start-ups in terms of the required multiple. In essence, they are taking on a lower risk for lower expected returns (-1.3% on average): although the largest band fell by two percentage points, it retains a target IRR of between 20% and 29%, while some investors – the number of which has also risen very slightly – still expect earnings of between 40% and 50%. Even the valuation of start-ups already in portfolios has been subject to remodulation: in 40% of cases it has fallen (significantly in 9% of cases) since, in the changed scenario, a reduction in value is expected when the funds exit their position.

One last curious detail is the fact that post-investment interaction between venture capitalists and entrepreneurs, aimed at supporting the start-up’s growth, has increased by almost one third (+28.4%). While in the past they mainly talked between once and three times a month, weekly or even daily contact is now on the rise. 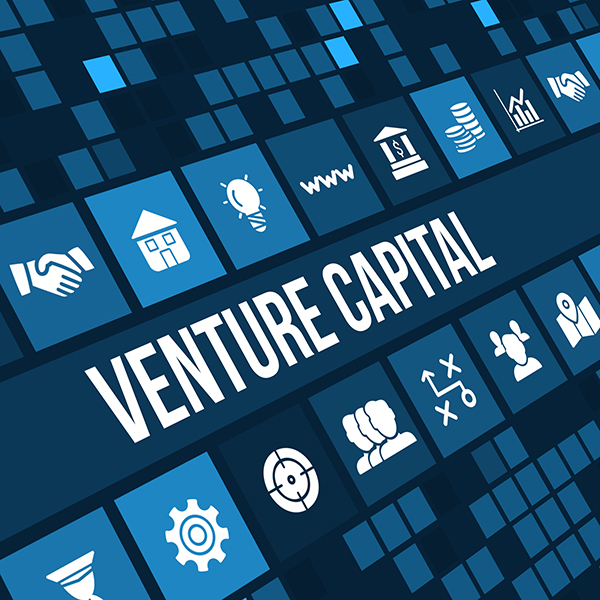 What is the geographical distribution of Venture Capital (VC) in Europe? Is VC activity agglomerated around a few preferred locations? Or, conversely, are we observing an increased dispersion of VC outside large metropolitan areas?

VC is an important source of finance for the growth of innovative startups, which contribute significantly to a country’s international competitiveness, as essential driver of innovation, job creation, and economic development.

Knowing how VC investments are geographically distributed is useful to understand the development of entrepreneurial ecosystems in Europe and, consequently, is a precious tool to approach innovation policies.

Using the VICO-DATASET of Risis (European Research Infrastructure for Science, technology and Innovation policy Studies) it is possible to describe the agglomeration patterns of VC activity at the regional, metropolitan, and industry level.

The study, led by Massimiliano Guerini, Massimo Colombo and Francesca Enrica Tenca of the School of Management of Politecnico di Milano, illustrates some crucial evidence.
The UK and France are the most relevant VC markets in terms of the number of VC deals, while Eastern European countries and Israel show the highest incidence rates (VC deals / GDP). Moreover, VC activity is mostly concentrated in large metropolitan areas, with increased concentration levels from 2010 to 2018. However, there is a non-negligible share of VC activity in more peripheral areas. In details, London, which represents by far the top VC hub, experienced a +50% in VC activity growth from 2010 to 2018, compared to a modest +6% of Paris (the 2nd VC hub) and Tel Aviv (+23%), ranked 3rd in terms of VC activity.  Some smaller areas in terms of VC activities registered remarkable growth rates from 2010 to 2018, such as Budapest (+167%), Milan (+62%), and Tallinn (+124%).

The findings have important policy implications for democratizing access to VC in more peripheral areas and for the development of entrepreneurial ecosystems, and they open a debate on the framing of research and innovation policies.